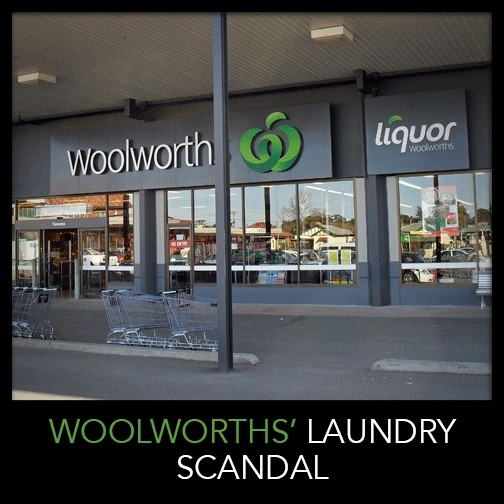 Woolworths Caught Up in Laundry Scandal:

After a Federal Court hearing on Friday, Woolworths has admitted to “being knowingly concerned in the making of, and giving effect to” a shady agreement between Colgate-Palmolive, Unilever and PZ Cussons in which the three companies arranged to pull their standard laundry detergent products from the shelves in preference of a cheaper alternative.

The scam, dubbed as, “Project Mastermind” by Colgate-Palmolive executives, falls under a breach of Australia’s competition laws, where the four companies knowingly created an anti-competitive environment, through which they would ultimately rake in higher profits. “Ultra concentrate” is cheaper to produce, store and transport than regular laundry detergent and, moreover, the new product is only half the size of the former. In turn, the companies decided to stop selling their regular detergents as a means to drive up profits from the cheaper, smaller alternatives, without passing those savings on to the customers.

In a statement, a Woolworths representative said that the company “acknowledges that the behavior of one of its former buyers was not consistent with the high standards of competition law compliance we seek to achieve.”

With the evidence and the investigation’s findings in tow, Justics Jagot of he Federal Court issues fines of $9 Million to Woolworths, one of the largest the ACCC has obtained against a party that was an accessory to breaches in competition laws, and $18 Million to Colgate-Palmolive.

As this information comes to light, this story becomes a testament to the article we wrote only a few weeks ago, “Australia’s Appalling Economic Crime Situation,” in which we addressed Australia’s position as the number one economic crime hotspot in the world. With cases like this, that of 7-Eleven and the multitude of romance scams, healthcare fraud, false injury claims, investment scams, lottery scams and more that take a hold of the Aussie population, it’s no wonder that our nation is leading the terrifying race.

Precise Investigation specializes in assisting corporations of all sizes to effectively handle, address and manage the risks associated with fraud, scams, malpractice and misconduct. We have been working at the forefront of the Australian private investigation industry for three decades, bringing with us an ever-growing pool of experience, coupled with the highest levels of expertise that the country has to offer. This, in turn, has allowed Precise Investigation one of the highest success rates of any Australian PI firm, and we’re proud to offer those same expertise and levels of experience to any customer, from any background.

We have highly-trained, qualified, insured and dually experienced operatives stationed across the country, with quick and efficient access to some of Australia’s busiest cities, including; Melbourne; Sydney; Perth; Hobart; Brisbane; Adelaide and even the more remote areas of the country.

Get in touch with us today and see just how easy it can be to minimise your risks of corporate fraud and protect yourself through highly-effective, tried-and-tested preventative measures.