[flexy_breadcrumb]
Home » Crash for Cash Scam: Here’s Everything You Need to Know Crash for Cash Scam: Here’s Everything You Need to Know

Road accidents are prevalent in Australia. Around 64% of adults with a driving license are involved in at least one car accident. But not all these accidents occur due to the mistake of drivers. Rather, crash for cash scams often make it difficult to safely drive on the road.

Types of Crash for Cash Scams

Fraudulent car accidents are referred to as crash for cash scams. It’s because these elaborate plans involve staging accidents to extort money from insurance companies. Some common types of car crash insurance scams are as follows:

Criminals may buy a car with the purpose of making money through crash for cash staged accidents. For this purpose, they may look for a seller on eBay or other online marketplaces.

These scammers often buy a car in poor condition. Then they insure it for a higher value than its actual worth by deceiving insurance agents. Then they crash the vehicle and take it to a car repair shop.

Car insurance scammers rarely work alone. They usually have a network which includes car repair shops too. So, they may take the vehicle to their accomplice vehicle mechanic who would charge extremely high rates for simple repair jobs. And fraudsters involved in the scheme distribute this illegal profit among themselves.

Aside from damages to the car, the scammers may also claim personal injury. They may claim they hurt their back or neck in the accident and suffer from PTSD as a result.

With a rapid increase in crash for cash insurance scams, insurance companies often acquire the services of private investigators. They can run effective background checks on insurance policyholders. Also, a thorough investigation before approving an insurance claim can reduce the risk of losing money to a scammer.

A tell-tale sign of insurance scammers is that they tend to drive haphazardly on the road. They may disturb traffic around them through unsafe driving. For instance, they may suddenly switch lanes and brake hard to cause a rear-end collision.

When it comes to deliberate crashes, criminals may opt for the Flash and Crash tactic. This is when they stop at a junction and flash lights to signal other drivers to cross the junction first. But when the innocent driver attempts to move, they accelerate and crash into them.

This type of deliberate accident makes it difficult for innocent drivers to prove the scammer signalled them.

When they deliberately cause an accident, scammers often try to manipulate drivers. They may intimidate them to extort money and convince them to pay in cash instead of contacting the insurer. They may do so by suggesting that it’d cost them less if they resolve the issue without involving the insurance provider.

When it comes to car crash scams, staging car accidents and deliberately causing road accidents through reckless driving are common tactics. But fraudsters may take it up a notch by submitting fake claims for accidents that never took place.

Hence, they may manipulate documents or evidence to claim insurance money. And they may take advantage of insurance companies through fabricated claims.

Aside from such ghost accidents, scammers may also damage their own vehicle at times. They may crash it with another vehicle or damage the parked car with heavy tools such as a sledgehammer. It gives the impression that the vehicle was actually involved in an accident. This way, the insurance investigator may get the idea that the claim is genuine.

To avoid becoming a victim of these schemes, it’s best to hire a private investigator. They are seasoned professionals and know how to identify inconsistencies in claims. Also, they look for evidence that can verify whether the claim is genuine or if it is a scam. 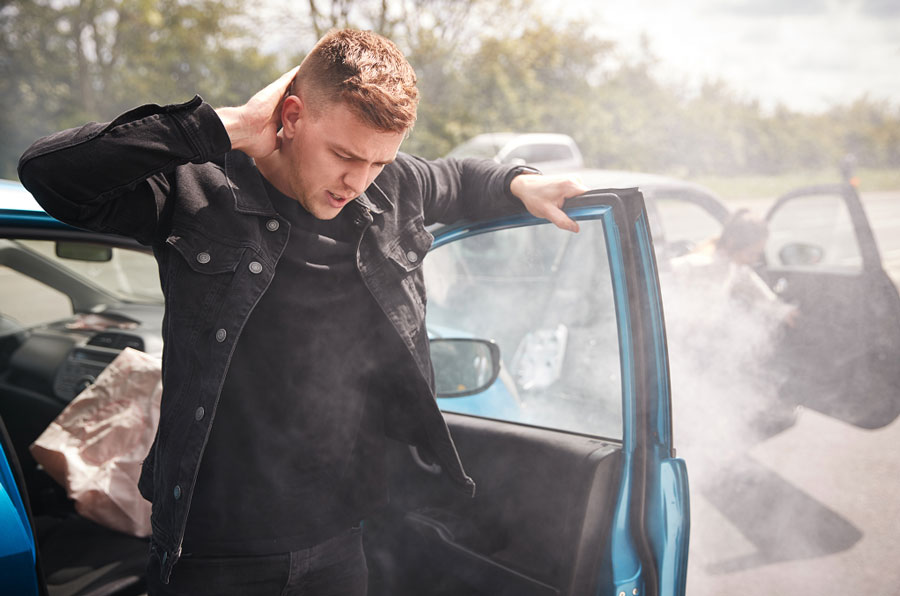 How to Avoid a Car Crash Insurance Scam?

Do you know how to identify potential scammers on the road?

Vehicle insurance scams are on a rise lately.

Do you think you were targeted by a scammer? Then it’s best to hire a reputable private investigator. Insurance companies also acquire PI services to investigate potential scams before approving road accident claims.

When it comes to investigating insurance claims, private detectives often use a combination of factual and activities investigation techniques. Thus, they conduct surveillance investigation to monitor activities of the claimant. This way, they can determine if the person is lying about the car accident or personal injury. Also, they may conduct interviews to cross-reference details and identify potential scams.

The investigation process involves inspecting the claimant background to identify if they have filed multiple insurance claims in the past. Also, the investigators may conduct social media investigation to find proof of fake or exaggerated claims.

From staged accidents to fake accident claims, Insurance Investigation services by a private investigation firm can assist you in identifying potential crash for cash scams.