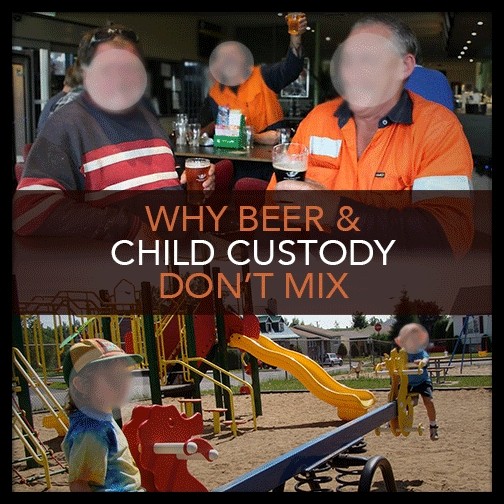 Mixing alcohol with custodial duties is never a good idea 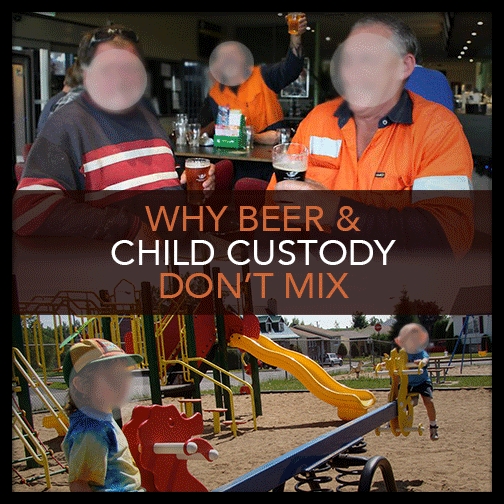 Melissa Solomon, a beautician working for a reputable cosmetics line in Brisbane, Queensland, and mother of two, had previously been involved in a child custody case with her ex-husband, David Pilkington to determine which of the two parents were the most suitable to act as the legal guardian of their children. The result of the case allowed David to spend just 72 hours with his 7 and 5 year-old children, Tom and Sarah, every 3 weeks – in other words, he would have access to his children for one whole weekend, once every three weeks.

David originally argued that he should be the soul custodian of the children as, at the time, he was the only person employed in the family and therefore the most likely to provide a comfortable and healthy lifestyle for the kids. However, the court ruled in favour of Melissa taking on most of the responsibility as she was able to prove that her home and the support of her direct family would provide a more appropriate setting for the children.

No more than 6 months after the court ruling was heard, Melissa came to Precise Investigation when her children seemed to lose interest in visiting their father. Ms Solomon stressed that she felt as though David was a danger to her and her children, hence the original divorce one year prior, but considering she was unable to provide any evidence to back her claim, Mr Pilkington was still able to see his children, albeit spend much less time with them.

After reports from her children suggested that David was acting outside of his custody orders, Melissa turned to us in the hope that we’d be able to obtain the evidence she needed to have the custody case reopened, this time prohibiting David from having any access to Tom and Sarah for the foreseeable future.

With that, Melissa provided us with Mr Pilkington’s home address and the times and dates at which their children would be with him, asking us to conduct general surveillance over the weekend that Tom and Sarah would visit.

That Friday, we tasked one of our local, specialist field operatives with setting up effective surveillance in the area surrounding David’s house. Melissa suspected her ex-husband of breaching their custody agreement, but considering that her children never outwardly stated that their father was doing anything wrong, she was never sure of what he might be doing – but it was no more than one hour later, when our operative managed to snap up the evidence she needed.

Mr Pilkington was seen, videoed and photographed leaving his house with his children at 10:32am, before making his way to the communal playground at the end of the street. There, he sat on a nearby bench with Tom and Sarah for some time, before clearly asking the children to interact with another child. From there, David demonstrated to his children and the other boy, roughly 6 or 7 years old, how the swings, monkey bars and spinning tops were supposed to be used. He proceeded to lift Tom above his head and assist him in crossing the monkey bars.

After seeming exhausted by the physically demanding nature of the lifting the children above his head, Mr Pilkington was photographed speaking to one of the mothers at the playground, making it clear that he was on the verge of leaving his children in her care. From there, our operative followed David for approximately 250 metres, where he came to rest in the outdoor smoking section of a local pub, with a beer in tow.

At exactly 11:18am, roughly 20 minutes after leaving his children at the playground, David was joined by a male acquaintance who presented another beer to Mr Pilkington as he sat at the table. The two went on to smoke, chat and drink until 12:05, when David decided to head back to the playground.

There, Tom and Sarah sat waiting patiently in the shade provided by the playground’s plastic slide. The 34-degree heat that day would have been enough to warrant drinking plenty of water, even for adults, yet there was little evidence to suggest that either Tom or Sarah had had any. Although the conversation was unclear, it seemed as though Mr Pilkington may have suggested that the children would get something to drink back at David’s house.

Our operative proceeded to follow the trio back to the house, where David was seen through his kitchen window preparing sandwiches for his and his children’s lunch.

The rest of that evening revealed very little, but, at approximately 2:45pm the following day, after David was seen buying large quantities of meat and a range of other groceries, three men and two women arrived at his house with a trolley that had clearly been stolen from a neighbouring supermarket, filled with at least three crates of beer, two boxes of wine, four unrecognised bottles of what appeared to be liquor and several litres of cola, as well as five branded bags that were later revealed to contain food.

Taking into consideration our in-depth understanding of the case at hand, our operative immediately sent across the information she had already gathered and our dedicated support team were able to clarify that what she had obtained was sufficient for the client’s case; A clause in the child custody agreement described a strict prohibition of alcohol consumption during David’s time with the children and yet, having signed the agreement, Mr Pilkington was discovered to have done just that, on at least two occasions within 36 hours.

Melissa would have liked to move forward at that point, but she needed to be very sure that this series of events was not an irregularity that we just happened to stumble upon – we agreed to repeat the procedure over the next visit to gather further evidence.

On the second visit, a different operative was assigned to the case to reduce the risk of bias within any data we recovered. This time, David was photographed and video-taped through his street-level living room window, enjoying a number of beers as he watched television with the children, unattended, in a room upstairs.

This time it was enough and the evidence, along with our operative’s surveillance notes, was presented to Melissa for inspection and, coupled with the support provided by our child custody specialists, Ms Solomon was able to build a strong case against her ex-husband to regain full supervision of her children.

If you’re in need of a professional evidence gathering service, be it to dispute the outcome of a child custody case, build a new one, expose a cheating partner or uncover a wide range of lies within business and personal life, Precise Investigation has the expertise and experience you need.

To discover what Precise Investigation, backed by 30 years’ experience as a leading Private Investigation firm, can do for your child custody case, please click here.

Precise Investigation can have a dedicated field operative, coupled with an expert support team available to assist you wherever you are in Australia. Melbourne, Sydney, Adelaide, Brisbane, Perth, Hobart and even the more remote areas of the country are all well within our reach, so please get in touch with us today.

Please note: All names, addresses and personal details describing the people associated with this case have been changed to protect their respective identities.