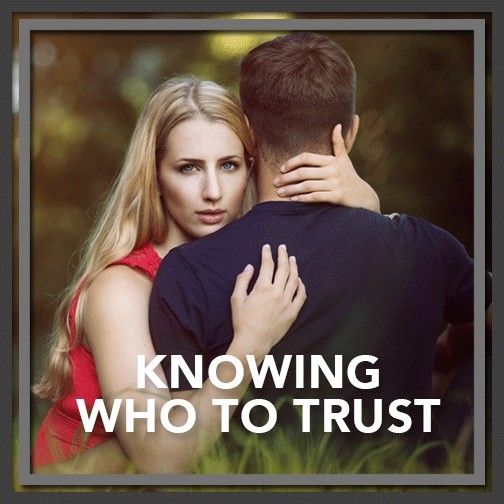 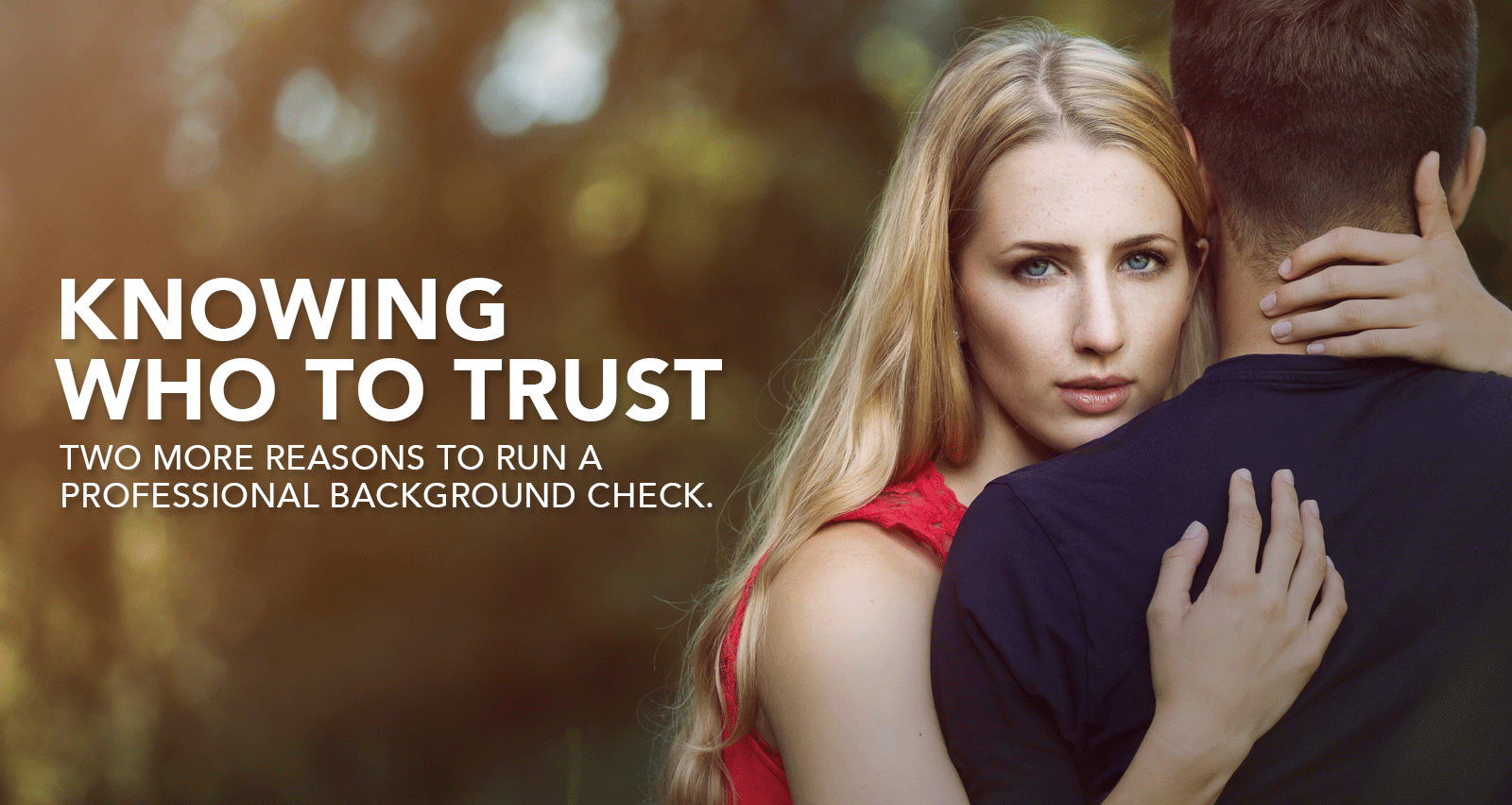 Knowing Who to Trust: Two More Reasons to Run a Professional Background Check

You may have recently read a story about a woman who had unwittingly married a convicted rapist, or you might remember a story from a number of years ago, about a man who discovered his wife of 19 years had been born as a male? Even if you haven’t read or heard either of these stories, both highlight the pit falls of forgoing background checks on potential loved ones and stand as good examples as to why protecting yourself and your best interests should be your first priority, regardless of how special your partner makes you feel.

The first of these stories came to light recently, as Jennifer Justice* was called into a Police station after her husband and the father of two of her children, was thought to be suicidal. He had a history with the law, meeting Jennifer through a cellmate in prison after expressing his attraction towards larger women. He managed to get his hands on a phone number for her and immediately started working his way into her life.

He told Jennifer that he was imprisoned for attempted murder after a run-in with Bikies in his youth; that they’d apparently forced him to kill a man and that failing to do so would have him and his mother killed instead. He did fail, but instead wound up in prison. This was his sob story, the story he told Jennifer and her family and the story that made them feel sorry for him, believing that he deserved a second chance.

After being released, he and Jennifer went on to get married and have two children together, enjoying a free and “normal life.” However, just three years later, Jennifer received that call from the Police.

They’d asked her to check the back seat of her car for rope, as they’d believed her husband to be suicidal at the time, following an attack he’d just made on a female jogger in a local park. He claimed that the jogger appeared as the Devil before him and, in fearing for his life, he attacked her and then ran, stating further that he’d been addicted to Meth and was in the middle of a vicious comedown.

As the case progressed, the man’s lawyer sat down with both him and Jennifer and told him, “you know it’s going to look very bad that you served a long jail sentence for rape.”

That was the first she’d heard of her husband’s real history. Not the story he’d told her, but the truth.

He was a convicted rapist and she had no idea.

Not only had he been imprisoned for rape in the past, but following his attack on the female jogger, more evidence came to light that he had committed another rape in the interim, this time holding a prostitute at knife-point as he had his way with her. While the act had happened before he attacked the jogger, it had taken almost a year for the Police to gather the evidence required to put him away – you can read the full case story here.

Jennifer was lied to. And, while she was playing with fire when she decided to involve herself in the affairs of a convicted felon, she trusted her heart and the words he spewed, only to have her heart broken and that trust tarnished for life.

The second story involves a Belgian man, Jan Cobbler*, who discovered that his wife of 19 years had been born as a man.

Jan and Monica met in Antwerp after the young Indonesian woman was hired by Jan’s sister as her babysitter. Jan then went on to fall madly in love, with his idea of the perfect relationship finally within grasp as her beauty, her mind and the fact that she didn’t want children really playing to Jan’s liking.

Nearly two decades later, with one of Jan’s own children also admitting that he’d heard rumours about Monica, did Jan find out that his wife had, in fact, previously been a man and the subject of a sex change operation.

While most PC individuals might argue that this serves no reason for a divorce, Jan’s overwhelming sense of shame and the utter deceit he’d endured for 19 years meant that any compassion; any feelings that he’d once had for her, were now gone.

Unfortunately for him though, on taking the matter to court, the presiding Judge at the time did not share in Jan’s lament, and decided against his appeal to have her evicted from his home. They now continue to share a roof, but sleep in separate bedrooms and live a silent, separate life.

Both of these stories ended the way they did because Jennifer and Jan allowed themselves to fall in love based on their partners’ word alone. Without checking the facts or doing a little research on the things people say, we can all fall victim to deceit and end up in financially, emotionally and psychologically traumatic situations later on.

There is a way to avoid these types of situations; through professional, government licensed background checks.

A background check is essentially a tool that allows you to review the facts about a person’s past, whether you’re interested in knowing about their previous employment, potential jail time, previous or other names, possible debt, marriages, children and divorces, vehicle history and, in some cases; more specific facts relevant to the people in question.

In both of these cases, had a professional background check been carried out before they’d tied the knots, both Jan and Jennifer would have been able to make a more informed decision on their actions and, ultimately, would likely have chosen not to follow their hearts, but the truth instead.

Without a background check, you never know what kinds of trouble you might be getting yourself into and, depending on the situation, you may even find that removing yourself from that situation proves very difficult.

In Jennifer’s case, she continues to fear for the safety and well-being of her children, especially as her husband’s sentence approaches its end.

Some people may find the idea of hiring a Private Investigator to root around in their partners’ histories distasteful, after all isn’t “trust” an integral part of any relationship? But, hopefully these and the hundreds of similar cases that take place in Australia every year will serve as a solemn reminder that you can never be too careful, especially as you come to make some of life’s biggest decisions.

The check doesn’t even need to relate to you, personally. If you have your doubts about a family member, or best friend’s new partner, you can still arrange to have that person checked and their stories verified. We can assure you that your family and friends will be far happier that you saved them from potential chaos, than the prospect that you were a little distrustful.

Rather safe than sorry, as they say!

Background checks aren’t only used to confirm romantic details either; they can be used across a wide range of potential concerns, including; safeguarding financial investments, conducting due diligence checks on new staff; checking for inconsistences in previous living arrangements, vehicle ownerships or criminal histories, and even to reveal what sort of information is discoverable about yourself.

So, if you’re ever in need of professional assistance in furthering your enquiries, remember that Precise Investigation is a Government Licensed private investigation agency that’s worked with hundreds of private and commercial clients across Australia over the last thirty years. We’ve got the experience, the resources and the skillsets required to have your investigations seen to quickly, efficiently and, most importantly, discreetly.

To have a background check carried out today, simply give us a call on 1300 856 011, or click here to reach out to us online. Either way, one of our friendly staff will be more than happy to answer any questions and help you in exposing the truth.

To read more about Jennifer Justice’s case, you can read the News.com.au article covering her story by clicking here.

Thank you for reading.

*Jennifer Justice and Jan Cobbler are not their real names.