Sagan Cowne
02:18 02 Sep 15
Used Precise Investigation to track down a former colleague of mine - John was able to help and managed to locate the guy in just four days. Great work guys and thanks again for your help!
See all reviewsWrite a review
powered by Facebook
[flexy_breadcrumb]
Home » The Ultimate Matchmaker | Private Investigators Abroad While not exactly the perfect definition for any private investigator, it would seem that our capacities in the field allow us the opportunity to delve into people’s lives and ultimately help them to better understand each other; particularly in moments of crisis, confusion, stress and resentment.

It is not unusual for any member of our team to be called upon by a jealous spouse, worried partner or concerned bride to be, and for such a wide array of reasons too – husband’s becoming more distant; wife’s starting to come home later and later; boyfriends being super secretive; money is disappearing from the joint account, and the list goes on.

As I’ve already stressed in some of our earlier posts, our cheating partner and surveillance investigations don’t always end in divorce, huge settlements and unhappy people. In fact, in the majority of our cases, our investigators end up proving that our client’s suspicions are unwarranted – that their husband has only become more distant due to financial anxieties for example; their wives are spending more time with colleagues as a means to alleviate home pressures; money is being spent on engagement rings or trips abroad etc. There are often really good reasons as to why people act they way they do, and it’s generally assumed that those notions are malicious when the people involved start to tell themselves that that’s the case.

Now, with all of that being said, our most recent story is a little further afield – it’s not a case of finding out the truth behind someone’s conspicuous actions, or being caught red-handed with their hands in the cookie jar. Instead it’s a proper little love story that we’re going to share with you. The story of a client called Rodney Malforn and his long-lost love, Jennifer De Luffein.

The two had met in December of 2014 at a vacation spot in Kenya, Northern Africa. They were both in relationships at the time, having both settled in with their partners to enjoy a week in the African bush together. Little did they know that over that time, both would learn more about their partners and figure that they weren’t as happy as they though they were. Over that week, Rodney and his girlfriend had arrived first – being some of the first people at camp, they embraced the luxuries and gave themselves the perfect opportunity to cement their relationship. However, Rodney noticed that the more time he spent with Fiona, his partner at the time, the more he realised that he wasn’t keen on the way she did things. She would often neglect basic relationship etiquette and allow herself only the pleasures that she ultimately needed, becoming less observant of Rodney’s needs as they spent longer together. Most evenings Rodney would find himself sitting outside alone on the balcony of the bar area, sipping a beer and having a cigarette in secret after arguing with Fiona about the mosquitos in the hut… which in turn put a huge downer on what could have been a very romantic evening.

It was on one such night that he was joined by Jennifer. He’d noticed her just the day before when she was moving in to another hut just a few doors down, with her partner.

She came over and asked if she could join him.

Rodney learned that she’d been with her partner for four years and this trip was an anniversary gift that they’d been wanting to give each other for some time. Unfortunately, they were also having marital issues… issues that they thought the freedoms of the African bush could resolve. But having travelled already for three weeks before arriving there, they were quickly realising that their relationship would need a lot more than some fresh air and animal sightings to fix.

They spoke for hours, helping themselves to the drinks behind the bar and sharing cigarettes as they exchanged stories. Rodney could feel it. This woman was on the same page. She shared his sentiments and followed the same drives and ambitions. She was interested in the same things as he was and, for the first time, Rodney found himself making a person laugh without having to explain his jokes or press them for any signs of understanding. He was falling in love and he didn’t know what to do about it.

For the rest of their stay, he would continue to go to the balcony each night, hoping that she’d appear again. The moment’s they shared in the day were often just simple hellos and the occasional “how are you,” both pretending to not really know each other. It drove him mad. He’d lie in bed at night wondering what could be… what would be… what should be.

It was only on his last night, and his last attempt to reconnect that he finally found the closure he was looking for. There she was. Before him. Already sitting in their spot, looking over the dry river bed in front of her as she sipped at her cider. 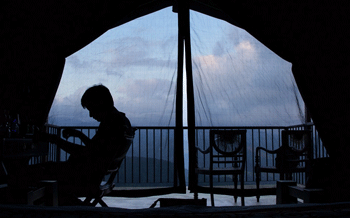 There, Jennifer admitted to her feelings and told Rodney that she too was beginning to feel the same things that he’d been experiencing – she wasn’t happy with her boyfriend and she was sorry to have met Rodney in their current situations. She explained that she’d most likely never see him again, but hoped that if he’d ever come to Australia, he would look her up.

Their night ended with them parting ways… no kisses, no late night frolicking… but a simple handshake; a long, lingering handshake with a deep look into each others’ futures.

Two years later, his job in New York had set up a new venture in Melbourne and there he was. He’d always had her in his mind and abstained, not by choice, but through sheer knowledge of what it is he was looking for. He’d never been able to find the same sense of desire or attraction in another woman since meeting Jennifer and, as such, was still determined to find her.

In his own search, he was able to get a rough idea of where she was – he found her place of work and a few generic photos of her surroundings, but as a means to perform the most romantic gesture he could imagine, he’d need more information.

Rodney called Precise Investigation and had us work to determine whether she was still romantically involved with her other partner, or a new one, before he decided to make any bold moves. While he really did want to be with her, he also didn’t want to stick his nose where it didn’t belong – home wrecking was not on his agenda.

As such, we put an operative on the case who quickly used the intel Rodney provided to find her home and her place of work. As a means to minimise any invasions of privacy, Rodney requested that we only spend a few minutes with her after work and at lunch times on random days over the course of two weeks – all so as to only gauge whether she was seeing someone else or not.

The results came back and he knew he was in the clear.

A week later he left a package at her doorstep; a small wooden box full of notes and letters that he’d been wanting to send her, but had never sent for fear of the unknown; for fear that he’d start a long distance relationship; for fear that she’d never receive them and for fear that someone else would read them.

Rodney and Jennifer have since been dating for six months and are working together on a recycling project in Bali.

Please note: All names, identifying characteristics and locations have been modified to protect the identities of those involved.