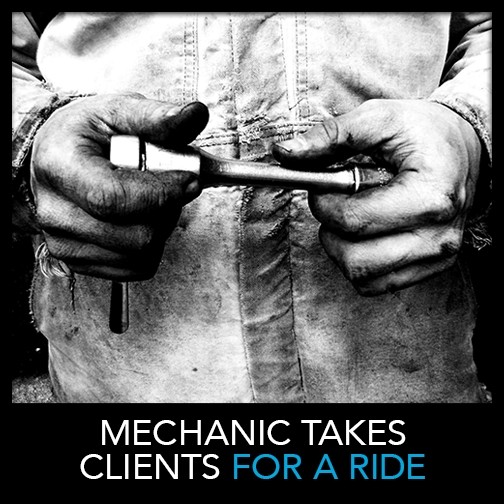 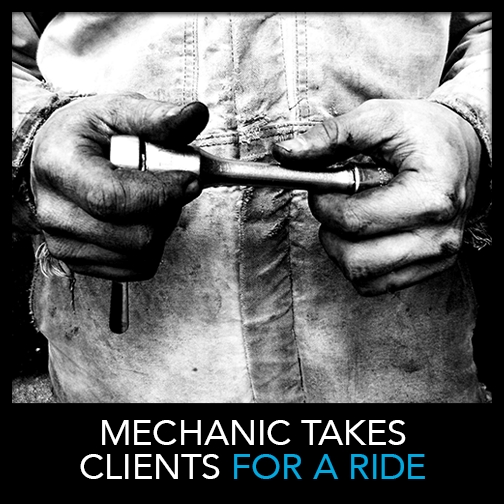 Mechanic Takes Clients For a Ride:

Piston Palace is a Melbourne-based Mechanical workshop, specialising in professional vehicular repairs, maintenance and upgrades. The workshop itself was reportedly booming, with people from all over the city bringing their cars and motorbikes in for the outstandingly low prices, quick turnaround times and friendly service.

Well, at least that’s what they’d like you to believe.

Michael Bowness, a 29-year-old bank clerk originally from New South Wales, had spent the vast majority of his life in Victoria and, more recently, in Melbourne’s bustling capital. After working for the bank for some time, Michael was able to put enough money aside to buy his dream car, a Toyota 86 – one of the newer models. After searching online, Michael managed to find a used one at a great price with relatively few miles on the clock. Unfortunately, however, the car that Mr Bowness purchased had a small engine problem that led to misfires at high revs. Whilst this isn’t necessarily a safety issue, it certainly defeats the object of having a performance vehicle when the car doesn’t actually perform.

After driving the car for a few months, Michael decided that he’d take it to Piston Palace on the Eastern side of Melbourne’s CBD to get a quote. Arriving at the workshop, Michael reports that the mechanics seemed very professional, friendly and efficient and, better yet, they gave him such a reasonable price to fix the car that he had no choice but to accept and leave the car with them.

Six working days later, Michael’s car was prepped and ready to go, so he took a taxi after work that Tuesday afternoon to go and pick it up. On close inspection, the car had been cleaned, inside and out, the engine bay looked sparkling new and Michael was assured that the problem had been resolved.

Immediately, Mr Bowness made his way over to the highway so that he could put his foot down a little and see what had changed. It turns out that everything had indeed been sorted and Michael was once again a happy man.

No more than three days later, on his way to work, Michael was sitting at a traffic light on Church Street, when all of a sudden large plumes of steam started pouring out from under the bonnet. Panicked, Michael immediately called a tow truck to have the car hauled over to Piston Palace, once again.

Michael notes that the mechanics seemed surprised when he, the truck and the problematic car pulled into their courtyard for round two. Terry, the owner of Piston Palace, came out to greet him and enquire as to what had happened this time. Mr Bowness explained the situation and asked whether it had anything to do with the previous issue. The misfires that were taking place before, came about as a result of an electrical signalling fault within the engine’s fuel delivery system, meaning that messages from the on-board computer weren’t being effectively delivered to the appropriate components of the car.

This time however, Terry explained that the issue was far more serious as the car had suffered a crack in the head gasket. This would lead the car to overheat, even on short journeys, and if left untreated would eventually cause the engine to cease. The price to repair it? While the original fuel issue set Michael back a reasonable $390.32, including parts and labour, Terry quoted $2,639.00 for the head gasket replacement, a job that was said to take hours and require a long list of parts.

A little shocked by the price, Michael then decided to investigate the matter a little further – the car had only done 63,000kms, so it was strange that it would develop an issue like that, unless the previous owner had really pushed the it to its limits. Michael decided to contact the dealership that he bought the car from to ask about the car’s previous owner and whether it would be possible to get in touch with her. The dealership wasn’t overly helpful but eventually decided that they would provide Mr Bowness with an email address.

Michael spoke to Ms Davies, the Toyota’s first owner, at length about the car and eventually came to the conclusion that there was no way that she was to blame for the damage. So Michael turned to Precise Investigation. He was very unsure of hiring us at first, but given the amount of money he was about to fork out, he thought the investment was worthwhile. It should be noted at this point that Michael had agreed to the repairs after getting a few quotes from other garages for a similar price.

The job was simple: set up a one-man surveillance operation in the vicinity, to capture footage of the men at work and attempt to uncover information that would help Michael to determine the real cause of his expensive engine problems.

After being stationed on-site for two days, our field operative made a note of who brought what cars in and what the associated issues with those vehicles seemed to be. The operative then returned the following week, again for a two-day stint, this time to see whether any of those customers’ cars were ready to be picked up. After recording his findings, he then returned again the the week thereafter to see if any of those clients brought their cars back again. One particular customer had brought in one of the new H3 Hummers in the first week and managed to have whatever problems it had repaired, yet just a few days later the Hummer pitched up again, this time behind a tow truck. Our operative posed as an everyday passer-by and simply enquired as to what kind of car it was, taking pictures to seem like a car enthusiast of sorts, only to hear that the man who owned the car had run into a serious engine problem… his head gasket had blown. The man was also kind enough to divulge the fact that the car was a nuisance as he’d only been there the week before to fix, what he thought to be, a power issue.

Our operative, coupled with our dedicated support team, worked tirelessly to review and analyse the footage and photographs that had been captured of the workshop and the mechanics and our findings were startling.

The operative at the scene managed to capture footage of a very strange practice that was taking place in the workshop… given the nature of modern car engines, their complexity and the amount of skill required to work on them, it certainly raises a few eyebrows when one particular mechanic was seen to be discussing the Hummer with Terry, before moving over to one of the shelves to pick up a mallet and a screw driver. He then walked over to the vehicle, with the bonnet open, carefully held the screwdriver in place near the top of the engine before striking the it with significant force, three times. The mechanic then turned to Terry and signalled a thumbs up, proceeding to return the hammer and screwdriver to the shelf and continue prepping the car for pick-up the next day.

Michael had been intelligent enough to ask the mechanics to keep all of his old, broken components to the side, following which we were able to inspect the original damaged head gasket. Our operative had the item sent off to Precise Investigation’s very own mechanic, who was able to pinpoint exactly where the gasket had snapped… it just so happens that at that there was one very clear imprint of a flat-tipped screwdriver that then stemmed into the crack that eventually spread through and cracked the gasket.

After offering our findings to Michael, and asking whether he needed us to investigate any further, he declined, satisfied with what we’d gathered, and went on to put a case together and appeal to Melbourne’s Small Claims Court. While we are not aware of the exact outcomes of that case, we do know that Terry no longer operates the business, two of the six mechanics who worked with him no longer work there either and Michael was able to recover the majority of his losses.

Fraud can take so many forms and it can infiltrate anybody’s life, from corporate moguls to hairdressers and bakers. It doesn’t matter what you do, where you work, or how good you are at it – if you work with other people that you need to trust, you run the risk of having that trust broken. Although there’s not much we can do to prevent people lying to you, we can at least help you to realise that you have been lied to, so that you can make the necessary arrangements to have those liars seen to appropriately.

Precise Investigation has faithfully served Australian businesses and individuals alike for close to three decades, making the agency one of the country’s foremost authorities on private investigations, whether aimed at corporates, the domestic market or personal issues.

If you think you, or someone you know, may be on the verge of being defrauded, please get in touch with us today and have one of our specialist field operatives lend a helping hand.

To find out more about our tailor-made private investigation services for individuals, please click here.

Melbourne, Sydney, Perth, Hobart, Brisbane, Adelaide and even the more remote areas of Australia are all well within our reach, so if you’re ever in doubt and you think you could use a little extra help, drop us a line or give us a call. We’re sure to be able to provide you with the expertise, skill and discretion you need to have your case carried out successfully.

Please note: All names, addresses, and personal information described in this article have been changed to protect the identities of those involved
.