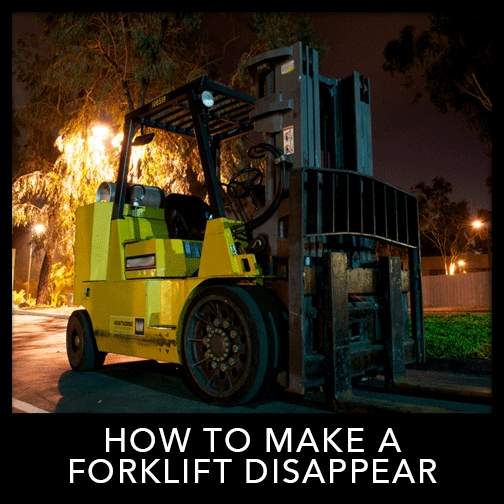 Private Investigators – Precise Blog – How to Make a Forklift Disappear

How to Make a Forklift Disappear:

Precise Investigation was recently tasked with uncovering the truth surrounding a mysterious case in Sydney, where one of the city’s largest forklift and hardware suppliers were having their stock stolen from delivery sites.

On numerous occasions over the last three months, KLM Impact had taken orders to have their forklifts rented out to urban development projects across New South Wales. The company would prep and inspect each machine before having it loaded onto a truck and driving them over to the respective site, only to find that once the agreement had come to an end, no arrangements had been made to have the forklifts returned. As such, KLM made attempts to reach the client by phone and email asking whether any time extensions were required and, if not, to arrange for pick-up, but found that the contact information they had was no longer valid; either the phones were disconnected, turned off or the numbers incorrect. With that, KLM then sent a representative over to the development sites to make enquiries with the foremen as to whether a mistake had been made in the order process, but found that nobody at those sites had any recollection of ordering, nor using a forklift at the time.

Confused and concerned at the fact that they were starting to lose track of their forklift stock, KLM Impact reported the incidents to the police. Unfortunately, however, at each of the sites where the forklifts went missing, there was no CCTV installed and no witnesses to take statements from, which in turn made the enquiries very difficult for the police to follow up.

With that, KLM’s board of directors came together to form a new strategy to have their stock returned, or at least identify what was happening to their products – they turned to Precise Investigation.

After a short but detailed briefing session, we decided that the best approach to thwarting these issues would be to have individual deliveries investigated as and when they left KLM’s warehouse. As such, we assigned a small team of operatives to the company’s delivery headquarters, just outside of Picton, NSW, where an estimated 20 forklift orders were processed per week.

When KLM received an order, one of our operatives would follow the truck, recording the journey on GPS tracking software, hi-res video and photographs wherever possible. On the fourth day of the operation, one of our agents followed one of KLM’s trucks, carrying two forklifts, to a brand new development site in the Liverpool area; bear land, newly processed, with little more than a fence surrounding it. As the KLM truck neared the location, we had our operative split off to take position elsewhere; a spot with a good view of the delivery point and its two alternative entry routes. On arrival, waiting at the site’s gate, was a relatively new, white Mercedes van with two male occupants; both in their mid-to-late thirties and both seemingly Australian by appearance.

KLM’s truck driver proceeded to have one of the men sign off on the forklifts before all three worked together to unload them from the rig. It should be noted that this particular order required two forklift trucks for five days, lifting no more than 450-650kg at a time, with a request to have them picked up from the same location at the end of the contract. Once all of the paperwork was complete and the trucks were parked side-by-side on the inside of the site’s fence, the two men thanked the delivery driver, got into the van and drove away, along with the KLM truck.

With our operative waiting patiently in place, at approximately 11pm that night, we were able to capture infrared footage of an empty rig parking up at the delivery point. The driver and an associate then went on to open the gate and load the forklifts onto the back of the truck before locking up and driving in a northerly direction, away from the assigned location. Our agent at the scene proceeded to follow the truck, taking note of the vehicle’s registration number and recording the journey with his vehicle’s on-board equipment. 80kms later, we observed the rig pulling into an industrial compound on the outskirts of Glenorie, a small town to the North of Sydney.

The investigator at the scene went on to park up a few metres from the area’s perimeter, before proceeding on foot with two separate surveillance systems and an SLR camera in tow. He prepared a tripod-mounted infrared system to record everything in the darkness as well as continuing to snap what he saw with the SLR, from a secluded location to the compound’s most easterly point. There, he was able to capture footage of the same two men unloading the forklift trucks and driving them into one of the compound’s larger warehouses.

Not only did we capture these men relocating the forklifts, but we were also able to record evidence of at least seven other forklifts being held on the building’s left-hand side. From the footage, we were able to identify at least four of those trucks as having been previously stolen from KLM.

Our operative immediately passed this information on to our Sydney-based offices, where our team went about preparing an evidence package for KLM to provide to the New South Wales police. Just three days later, an SIU team were pulled together and the Glenorie warehouse was raided.

While most of KLM’s stolen forklifts had already either been sold off or scrapped for parts, there was enough evidence for the company to press charges against the 18-man operation, recovering their assets and filing for in excess of $150,000 in damages in the process.

Our team of qualified, licensed and fully-insured private investigators, along with the professionals behind the scenes, have helped hundreds of clients from all walks of life to overcome their personal, commercial, industrial and governmental issues. With over thirty years’ experience as one of Australia’s top PI firms, we have come to understand that each industry and each respective case requires a discrete, tailored and cost-effective solution; it’s with great pride that we are able to deliver the results our clients need to ensure that their troubles are brought to a close as quickly as possible, time and time again.

If you’re ever in need of a professional approach to your concerns, no matter how simple or complex they may be, then please:

Please refer to the links below if you’d like more information on a particular service. Bear in mind that our website also contains details regarding the multitude of additional services we offer:

Precise Investigation and our operatives have, and continue to work across every state in Australia, regularly providing our professional services to the likes of Sydney, Melbourne, Adelaide, Brisbane, Hobart, Perth and even the more remote reaches of the country. Get in touch with us today and find out just how easy it can be to have your toughest questions answered and the admissible evidence you need gathered up.