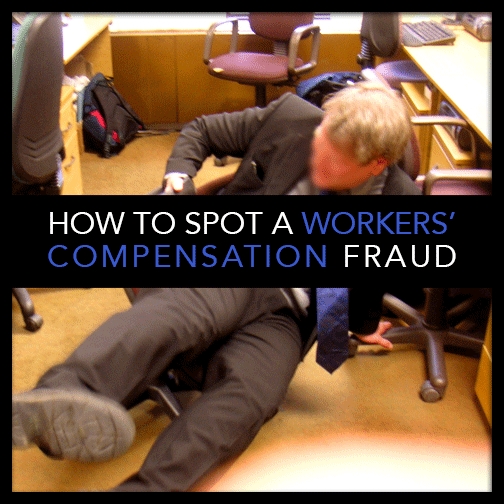 How to Catch a Workers’ Compensation Fraudster:

…Or just let them come to you!

Workers’ Compensation isn’t an overly abused system. In fact, of all the claims, a study by PBS Frontline has shown that only 1-2% are fraudulent. However, the damage and costs incurred by those types are fraud are significant.

It’s not uncommon for people, who are perfectly fine, to call in sick for work. Yes, it’s an annoyance that many employers have to bear, yet a delightful notion to employees… the idea of free wages, that is. But there are some who dip their fingers too deep, and come to a point in their lives where they need to reflect on their actions; claiming workers’ compensation maliciously, wanting only to kick back and relax.

But: it’s illegal. Luckily it’s just one of many types of fraud that a professional Private Investigator can help you uncover.

Sometimes you won’t need to though – take these as two examples:

Catchy claimed that she’d suffered a shoulder injury that prevented her from lifting trays of mail into the back of US Postal Service trucks. She went on to collect benefits less than a year later, in 2005.

Four years later, she appeared on the Popular American TV Show, The Price Is Right, where she was seen using her whole upper body, including her shoulders, to spin the show’s infamous wheel, twice. It was later discovered that she’d also uploaded a photo of herself using a zipline… an activity that involves more than “adequate” upper body movement.

It was Cathy’s appearance on TV that gave her away, though and, as a result, she was indicted into the US District Court for the Eastern District of North Carolina. In her claim, Cathy stated that she couldn’t, “stand, sit kneel, squat, climb, bend, reach or grasp,” but the indictment described her movements, whilst spinning the “Big Wheel”, as quite demanding, requiring Cathy to lift “both arms above her head and grip the same handle with both hands.” With her condition in mind, performing such a task would have been “a pretty mean feat,” as they put it.

Similarly, Paul Marshallsea, a project manager for a Welsh charity called, Pant and Dowlaid Boys & Girls, was exposed after becoming an Internet sensation. Paul claimed Workers’ Compensation following his growing “work-related-stress,” but was seen a few years later, chilling on a beach in Australia before suddenly jumping into the water to wrestle a 6ft shark away from unsuspecting children. A hero, perhaps, but a fraudster too.

If you suspect someone of committing fraud and you’d like to see some evidence, then hiring a Private Investigator is the way to go. In both of the cases we mentioned above, amongst many others, Private Investigators were used, following the initial suspicion, to uncover enough to press charges.

What you do with the evidence is up to you, but if you need it, contact Precise Investigation today.

We have private investigators in cities all over Australia, so if you’re in Melbourne, Sydney, Perth, Adelaide, Brisbane, Hobart or anywhere else, we’re just a few moments away.