Sagan Cowne
02:18 02 Sep 15
Used Precise Investigation to track down a former colleague of mine - John was able to help and managed to locate the guy in just four days. Great work guys and thanks again for your help!
See all reviewsWrite a review
powered by Facebook
[flexy_breadcrumb]
Home » Health Inspector Fired After Private Investigator Tracks Her Work Day | Surveillance Investigations 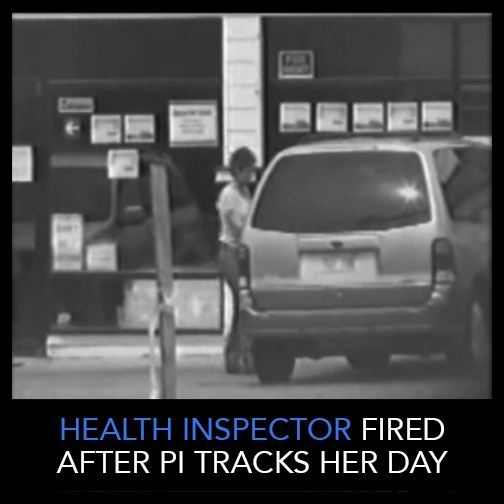 Private Investigations can often lead to a number of benefits for parents, husbands and wives, business partners, employees and companies alike.

You’ll frequently hear news about someone being caught after doing something they shouldn’t have been, and in a lot of those cases, there’s a professional PI behind the scenes.

Take this case as an example, and there are many like it:

Jacqueline Davenport, a US-based Health Inspector, was tasked with going from property-to-property to determine whether dangerous amounts of chemicals were present and, if so, issue an order to have the property cleansed.

It’s an important job as most of the harmful substances that these inspectors discover can lead to health problems in later life.

Ms. Davenport reported that she was performing her daily duties, until a small discrepancy led her managers to grow suspicious.

After hiring a Private Investigator, it was later revealed that Ms. Davenport had actually been skipping out on her job to enjoy some of her own past-times and hobbies instead.

You can read the full story, from KETV.

In a case like this, it’s not only the company in question that suffers as a result of paying wages to a non-participating employee, but the very people that the company is trying to protect suffer too.

If you feel that your staff, colleagues, bosses or partners aren’t doing what they say they are…

We specialise in exposing lies and gathering evidence to present a solid case. Precise Investigation can offer help in Melbourne, Sydney, Perth, Brisbane, Adelaide, Hobart and many other cities across the country, so if you’re in need, give us a call.