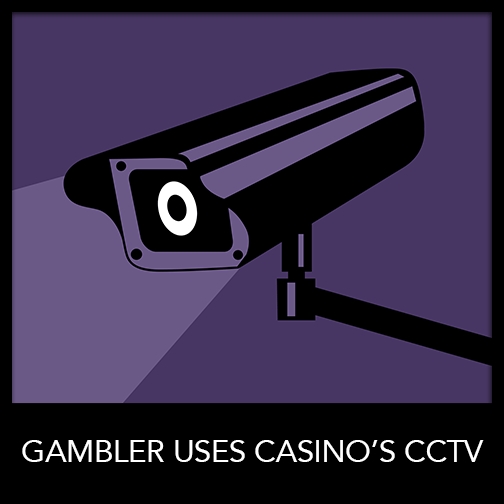 A high-rolling gambler has allegedly won $32 million at the Crown Casino in Melbourne, Australia, thanks to a little network hackery carried out by accomplices.

Games like poker are much easier to win if you know some or all of your opponents’ cards.  After all, it’s hard to sustain a bluff if the person you’re bluffing has actually seen your hand.

In this case, the un-named \”whale\” (casino speak for a player who wagers large amounts of money, often on giant-sized individual bets) is said to have relied on his accomplices to feed him information about what other players at his table were holding.

His accomplices were able to snoop on the other players because they had remote access to the casino’s own surveillance system, giving them a bird’s eye view from CCTV cameras right inside the high-rollers’ room.  The $32 million was apparently scooped in the course of eight big-stakes hands.

To increase their chance of catching cheaters (and thereby, no doubt, to discourage gamblers from trying to cheat in the first place), casinos typically have substantial networks of cameras giving high-quality, real-time video feeds.

Although Precise Investigation does not investigate casino heists like this one, we are certainly able to help if you are after a private detective or investigator. We operate in Melbourne, Hobart, Sydney, Canberra, Brisbane, Adelaide, Perth or any other regional city in Australia. Our surveillance and investigation services cater for domestic requests and services like cheating spouses and missing persons or commercial work such as insurance, work-cover and employment claims.  Contact us now. We have an affordable, discrete and reliable service.

Incredibly, a gambler has walked away from Melbourne’s Crown Casino $32 million richer, and it’s suspected that he was able to pull it off due to some nifty hacking carried out by accomplices. Unfortunately, the mounting evidence suggests that he’s not going to be allowed to keep it.

High-rolling casinos are often plagued with CCTV cameras as a deterrent to potential crooks, reinforce the notions of security and help the casino with any inquiries, just like this one, but in this case the cameras were used to do just the opposite.

The hackers allegedly tapped into the casino’s security camera network and were able to feed this high-flyer with information, mostly pertaining to what his opponents were holding in their hands.

Poker, unlike other card games, is not only based on luck. Players often rely on their bluffing skills to give their opponents the impression that the cards in their hands are much stronger than they actually are. Bluffing can lead to someone winning even if their hand is far weaker than anyone else’s. Now, how effective could bluffing be when someone is quite literally looking over your shoulder?

The $32 Million was apparently won over 8 high-stake hands, and our pro gambler and his team were able to scoop the lot without anyone noticing, all thanks to the very tools that are supposed to stop these things from happening.

Although this is an interesting story, Gambling and its associated issues often give rise to serious problems at home, with friends and even at work. If you suspect that someone you love or care for is suffering from an addiction to gambling, Precise Investigations can help. We have Investigators available across Melbourne, Sydney, Perth, Adelaide, Brisbane, Canberra, Hobart and many other regional cities in Australia, so we’re just a stone’s throw away. Contact us today to find out how our affordable, discrete and reliable services can help change lives.