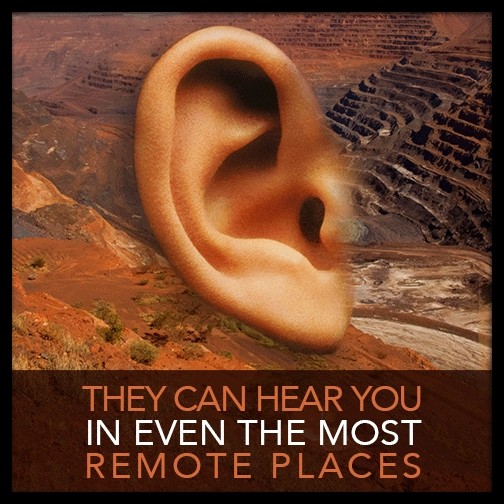 All It Takes is One Small Microphone:

Ajaxx Mining Pty Ltd, is one of Australia’s leading natural resource and mine operators, specialising in the extraction of iron ore from its numerous mine sites in Western Australia.

Since late 2013, Ajaxx Mining Pty Ltd has been working to further improve on its overall efficiency and productivity after a discovery was made regarding the enhancement of certain machinery and the procedures which governed its use. As such, board members, directors and management would regularly hold meetings at their main site in Tallering Peak, WA, to discuss the steps needed to move forward, results from what had been achieved so far and the associated implications of applying these new processes to the business.

Needless to say, the information discussed in those meetings was highly privileged and, some would argue, worth a pretty penny or two.

Operations Director, Mike Howell, was more than aware of how interested a Ajaxx Mining’s competitors would be in getting their hands on the statistics, methodologies and practical applications that Ajaxx was in the process of developing, and organised to bump up security.

We’re not talking about a James Bond scenario here, where you’d expect to see hundreds of armed guards, with earpieces and sunglasses, strolling the corridors and manning the roofs, no; Ajaxx Mining was more interested in a low key approach to minimising the associated risks of corporate espionage.

Instead, in early 2014, Mike Howell hired Precise Investigation to perform regular bug sweeps in and around the relevant offices, in an attempt to discover any potential listening or video recording devices that may have been planted to eavesdrop on the confidential meetings.

As per Mike’s instructions, on average Precise Investigation would inspect the main board room at least once a fortnight, the relevant managers’ offices at least once a month and the surrounding offices no less than once every three months – all without the knowledge of any stakeholders, directors, managers or staff, except that of Mr Howell, of course, and one other director.

It was, and still is, imperative to Ajaxx Mining that their Intellectual Property remain secure; withholding the fact that regular bug sweeps were actively being undertaken would lessen the chances of a snoop being successful in obtaining and sharing information illegally.

Mr Howell had always felt it necessary to perform these bug sweeps, despite constant reports of there being no secret devices in place, and thank goodness for his intuition – On September 29th of this year, we discovered that a microphone unit had been installed behind a plug socket in the main board room – a location that’s frequently scanned, leading us to believe that it had been planted there as recently as just a few days earlier. The device had been hard-wired into the building’s electricity supply, allowing it to run as long as necessary until it gathered the information its owner was after.

After finding the unit, Precise Investigation initiated a large-scale, covert operation on the site, to locate the microphone’s receiver, which based on the type of transmitter, could not have been outside a 300m radius of where the device was located. As such, a team of six undercover operatives set about tracing the whereabouts of the transmitter, using the latest in counter-espionage and bug sweeping equipment to help them trace signals and pinpoint any associated tech.

On the morning of Wednesday, September 30th, the receiving device (receiver) was found duct-taped to the side of a cooling pipe that fed the staff quarters’ and main offices’ generator, equipped with a 256GB SD card. Taking into account how minute the data packets are that are sent and received by audio recording equipment of this scale, a 256GB memory card would allow for a great deal of recording time and, furthermore, the lack of a transmitter here would suggest that this receiver would need to be picked up at some point in the future. As such, Precise Investigation’s support team worked closely with the operatives at the scene to set up a network of undercover surveillance equipment, and station two dedicated agents in the area, with a particular focus on entry points, the receiver itself and potential exit points.

It wasn’t until last Friday (16th October) that our corporate spy made herself known; that’s more than two weeks after the device was initially planted. Our operatives were able to capture video footage, photographs and infra-red imagery of Joanna Oakmont, Personal Assistant to Ajaxx Mining’s Finance Manager, replacing the receiver’s batteries, removing the 256GB SD card and swapping it with another, between 1:35pm and 1:45pm that lunchtime.

Our evidence was gathered and presented to Mr Howell, who has since made it known to the relevant directors. Upon questioning Mrs Oakmont, Ajaxx Mining was able to determine that Joanna had been approached by an third-party, acting on behalf of what Ajaxx Mining now believes to be a competitor, and paid to plant the devices. She had used the help of a local miner, impersonating a maintenance professional, to install the microphone in the main board room.

Ajaxx Mining terminated both Joanna’s and the miner’s employment contracts immediately, and are now planning to restructure their policies on internal security protocols. Precise Investigation is sure to lend a helping hand across all aspects of their HR-related investigations as well as any insurance, legal or associated corporate investigations, thereby assisting Ajaxx Mining to effectively minimise their risks of corporate fraud, embezzlement, IP theft, false claims and more.

Corporate espionage, as some of you may now, can be instigated by companies, organisations and communities of any size, for any reason and it’s not uncommon for most people, especially small business owners, to assume that it’s unlikely to happen to them, but unfortunately, that’s just not true.

Large companies can spy on smaller ones to gather information on the value of those businesses, in plans to buy them out; competitors can purposefully drive up advertising costs over the internet, or even go as far as to place large orders, only to cancel down the line – the situations in which corporate espionage can be applied, are limitless so it’s with great pride that Precise Investigation offers a wide and all-encompassing suite of tailor-made corporate investigation services, specifically developed to help Australian businesses protect themselves against it.

To explore our range of counter-espionage services, in particular, please click here.

Precise Investigation’s thirty years’ experience as a leading, Australian private investigation firm, is available to businesses and members of the public alike through the expertise of our nation-wide operatives and dedicated support team. Perth, Adelaide, Melbourne, Sydney, Brisbane, Hobart and even the more remote areas of Australia, are all well and truly within our grasp, so get in touch with us today and see what we can do for you.

Please note: All names, addresses and personal details describing the people associated with this case have been changed to protect their respective identities.