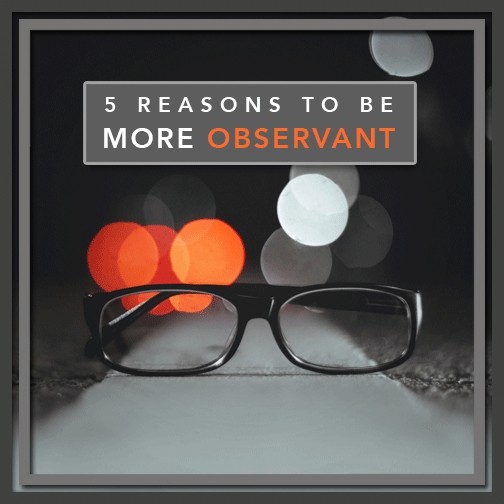 differences between listening and hearing

How and Why You Should Be More Observant in Everyday Life

Being observant and having a keen eye for detail are traits that most would assume a good private investigator, federal detective, spy or other form of federal agent might have, but the gauntlet is carried by more than just a profession.

Being observant can help you regardless of your career choice, your social status, your mental state, your income bracket or anything else for that matter – it is a trait that goes hand-in-hand with almost any other attribute that you could hope to flaunt or at least put to use in a day-to-day setting. The difference is, however, that unlike most other traits, being observant opens the door to a world; a dimension that exists on earth that so many people just don’t have the patience to explore.

Patience? Well yes; the key to great observational skills is patience. Those who are inpatient are likely to become easily distracted or grow bored of a given situation, thereby preventing them from relating to it in a way that would ultimately benefit them and the people they’re with.

Let’s take a look at an example:

Jenny and Jack are with some friends at a barbeque on Saturday. While Jenny is talking to her BFF, Bianca, she looks over to see that Jack is talking to one of his female co-workers. To any unobservant onlooker, it would seem that the two were merely having a conversation and that there was nothing more to consider… however, if Jenny had been more observant, she may have noticed that Jack’s body language, his distance from the lady he was speaking to, the facial expressions he pulled and the fact that they had actually spoken several times over the course of the barbeque would suggest that Jack is interested in that woman, and she in him.

Observation isn’t only helpful in the realms of understanding human emotion either, albeit a very useful tool in providing background information into why someone is acting the way they are, or doing the things they do.

Let’s take a look at the five ways that being more observant can change your life:

1. Deeper Insights into Life and Love

We recently wrote an article about the differences between listening and hearing, and in the same vein, listening is a key aspect of observance. By paying more attention to the things that the people around you are saying and doing, you are more likely to be able to hold better conversations, show greater interest, spot lies and even “read between the lines” as people beat around the bush. All of these things are given away by the way people carry themselves; the way they speak and; the way they move.

Whether it’s finding a $20 note on the floor; a new shortcut that you’d never noticed before; a point on the map that you’d previously overlooked; another button on your TV remote that you’ve never or even that your cut has a lump on its throat – being more observant means that you ask more questions, use your senses more and open up to the world and things around you.

Another important key to good observation is memory. Using information that you’ve recorded in the past and comparing to what you’re learning in the future and looking for discrepancies. For example, simply listening to your best friend’s story last week about how they managed to take a super model home, only to hear this week that it wasn’t a super model, it was an actress. Using memory, coupled with visual observations we touched on earlier, you’ll find that you quickly become accustomed to spotting lies or at least mistakes in what people say.

Ok, while this one might sound a bit extreme, our example will play it down a bit. It’s not always a matter of life or death, sure, but if you can prevent people from becoming seriously injured, isn’t it just as important? This one actually happened a few weeks ago, but while I was in a conversation with my partner, as she was cleaning our favourite kitchen knife, I noticed that she had inadvertently turned the blade to face into the sponge as we were talking. If I hadn’t stopped her there and then, she’d have run the sponge along the knife’s razor-sharp edge, cut through it and straight into her hand. Simply because I’d opened my eyes and stayed aware of what was going on, was I able to stop that accident.

Winning the trust and appreciation of your employers is something that many people across the globe struggle to do, yet the biggest reason that we’ve found so many fail, is simply because they aren’t “seeing” what’s in front of them, be it because they’re thinking of the latest episode of Game of Thrones during the meeting; trying to think of what to make for dinner; looking at Jerry’s nose during the presentation, instead of the screen or the speaker and so on. The truth of the matter is that if you are able to deliver on what your employers are really looking for, which you’ll only really know by asking more questions and being more observant, then you’ll get to where you need to be, much faster.

There are actually thousands upon thousands more uses for observation and the benefits it has outweighs those uses 100:1. But the question is, how can you train yourself to be more observant?

Being unobservant, as we’ve already discussed briefly, stems from impatience. If you are impatient, you are far less likely to be opening your mind up to new information because you’re focused on trying to change your situation or the information coming from it. You might not even know you’re impatient – you may just assume you grow bored easily – but they are one and the same.

So, to open your mind a little, I suggest you simply try to unclutter your mind, let the pressing issues of yester-year and tomorrow float to the side for a moment; and allow that sense of impatience and boredom to set it. Once it does, use it and the energies behind it (you know, the ones that make your leg bounce; bite your nails; touch your lips and dart your eyes around) to focus in on a few things around you. Look at the people. Look at where they are. Try to tell yourself a story as to how they got there and why they’re talking to each other the way they are. Ask yourself why she dressed that way today and why he looks so happy. Ask yourself if the baby in her arms is theirs or hers only and try to figure out if you’re right. Look at the floor and try to see whether the tradies did a good job at tiling it; try to spot places where the plaster wasn’t properly cleaned up and make a note to yourself that you’ll be more aware of things like that the next time you do some renovating.

This article really could go on for aeons, because there is so much to be said about being observant… but we hope that his has at least sparked a little interest into what could be, if you decided to test your own skills of observation out in the real world.

Want a great place to start? Precise Investigation has a weekly competition where your eyes are really put to the test. Take a look at any of our social pages, or the blurb below to find out more!