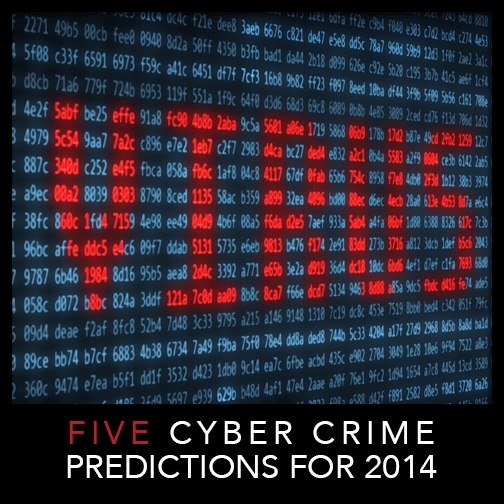 According to WatchGuard Technologies, 2013 will be remembered as the year of the cyber threat. From the NSA hacking scandal to the massive Adobe Data Breach, high security incidents have reached an all-time high.

Because of this we’ve compiled a list of threats that face online users this upcoming year and some precautions you can take to stay safe.

So what should we expect from cyber crime in 2014?

Malware is designed to spy and illegally extract information such as passwords, credit cards and bank details. Clicking a dodgy link or opening a strange email can easily install this type of virus.

New types of Malware are becoming more destructive by the day with one example being the truly frightening. CyptoLocker, a virus that allows hackers to hold users ransom by encrypting important files then demands money to reverse what they have done, is of particular concern when it comes to your online data.

With the National Crime agency in the U.K issuing an alert announcing CyptoLocker hackers have targeted “tens of millions” of users, it’s why we think malware will get meaner in 2014.

When everything is connected via the Internet, tech vulnerabilities are more likely to be exposed. Securing data networks for devices such as mobile phone banking apps is a relatively new practice and because of this, security is vulnerable.

We recommend you always take note of finances and get more hands-on when it comes to monitoring your debits. In an age of digital withdraws, it’s unbelieveable how many people fail to regularly check in on their statements. You could find that money is being siphoned off without you even noticing!

Phones and tablets are likely to be the platform most susceptible to attacks in 2014. Recent cases have demonstrated how an unsolicited text message can easily exploit banking information. Compound this with the low cost of texting; hackers can cast a large web for potential victims.

Expect LinkedIn and other social media to get heavily targeted. Hackers will pose as potential users to gather information and compromise organisations with stolen data. As the tech games gets better, inhibiting many hackers from manipulating big company data via technology, the psychological game will get more pervasive as hackers target the more vulnerable user.

Widely used but since dated software such as Windows XP and Java 6 are predicted to be big targets for cyber crime. These old and rarely updated technologies are vulnerable to hackers because developers rarely keep them up to date.

We recommend you upgrade or at least update all software as often as possible to combat cyber attacks.